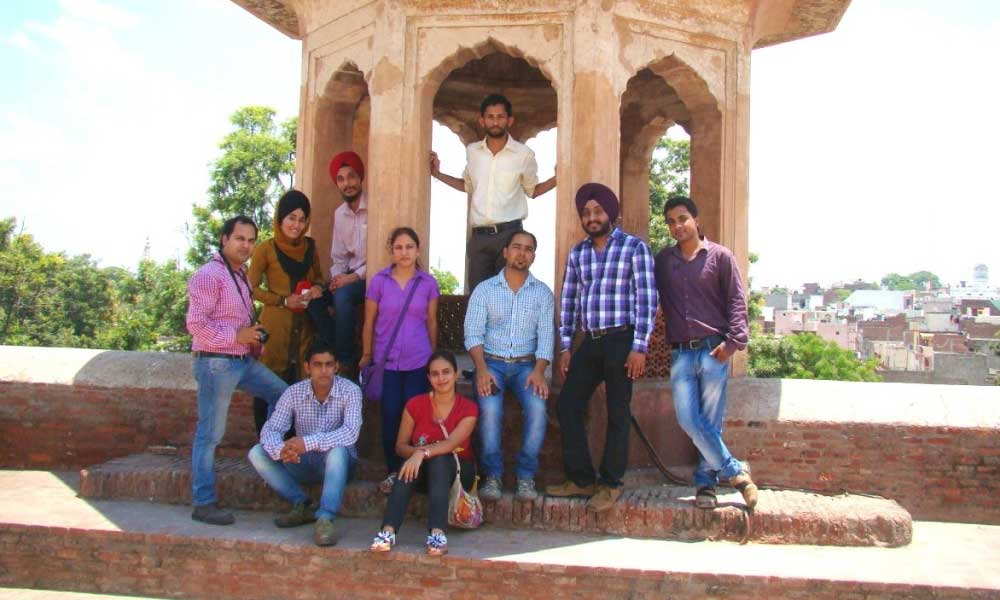 As we all know that a fresh mind keeps our thoughts motivated. By keeping this inspirational thought in mind SIT family planned a trip to Kurukshetra. Basically Kurukshetra is a land of historical and religious importance. It is situated in Haryana district state of India. It is a holy place which is also known as Dharmakshetra (“Holy City“). This break from our official routines refreshes the mind and soul of all the employees.

The importance of the place is attributed to the fact that the Kurukshetra War of the Mahabharata was fought on this land and the Bhagvad Gita was preached on this land during the war when Lord Krishna found Arjuna in a terrible dilemma. Due to its highly famous values

Everyone boarded the bus at 8 am at ISBT, Chandigarh. Our Journey was started with the bright sunny day early in the morning. We all had a B’fast together in the Hotel Hot Sizzler, Pipli Road with pure indian meals. We all was passed by some beautiful and nature sceneries of greenery and lakes.

Sheikh Chilli’s Tomb was the 1st place visited by us which is very much popular place to be roam. Here is a tomb of Sufi named Abd-ur-Rahim Abdul- Karim Abd -ur Razak, who were mostly famous by the name of Sheikh Chelli. He was Qadiriyya Sufi master of Mughal Prince Dara Shikoh. The architectural plan of the tomb shows considerable Persian influence. This beautiful tomb and attached Madrasa are associated with the Sufi Saint Abd-ur-Rahim. There is a mosque called Pather Masjid (Stone Mosque) that was built in red sandstone. On the north side are the Mughal Gardens.

Then we moved to the Kurukshetra Panorma & Science Centre which is also consider in the most popular tourist attractions which is working as an automous institutions under the agies of Minisrtry of Culture , GOI, the aim of of which is to popularize science amongst the general masses. Chief attraction of this museum is 45′ high painting hall comprizing of lively paintings (murals) relating to MAHABHARAT WAR, a garden spread in 3.5 Acre is an additional attraction of this place, that comprises a tv studio, an impressive exihition of India’s 4500 year-science heritage, and 3-D motion pictures.

After this SIT family had a lunch in Food Plaza together. Lunch was very delicious with famous Indian dishes like Dal & Paneer with mixed Roti’s, naan’s, salad’s and other varities were there. The feelings coming throughout the lunch was the feelings of togetherness & unity.

Nowadays Technology is increasing factor of the development in everything from small watch to the huge 2D & 3D screens. By keeping this in mind we moved to the Kalpana Chawla’s Planetarium.

Kalpana Chawla the women full of confidence, courage & spirit who already proved that nothing is impossible in life even your dreams of catching the stars. She was the first Indian American astronaut and first women in space. She was the first flew on space shuttle Columbia in 1997 as a mission specialist and primary robotic arm operator.

In this Panetarium we had seen the 3D show there which was very much adorable. We all had a great experience watching this. We can consider it also a short movie clip from which we get lots of knowledge about the stars, Astronaut’s, planets & space experience of scientists like Kalpana Chawla’s and many more. This experience covers the distance of stars to earth which shows that human beings can do something beyond their imagination.

After that we went to some spirtual places like Jyotisar & Brahma Sarovar.

Jyotisar the name itself describes its meaning that ‘Jyoti’ means light and ‘Sar’ means the coremeaning. Hence the name of place is a reference to the ‘core meaning of light’ or ultimately of God. It is one of the most revered holy sites of the holy city of Krukshetra. A Vat (Banyan Tree) stands on a raised plinth. Local traditions say that this tree is an offshoot of the holy Banyan tree under which Lord Krishna delivered the sermon of Bhagavad Gita, the doctrine of Karma and Dharma to his wavering friend Arjuna. It is here that He showed his Virat rupa(Universal form). The entire area has been landscaped with flowering bushes and eucalyptus trees there was also a garden of our national flower LOTUS which was very beautiful and attractive. Even we purchased couple of flowers there.

Last but not the least we moved to the Brahma Sarovar which is a water tank sacred to the Dharmic religions. This lay emphasis on taking bath for internal and external purity.

After our final destination we all had a refreshment party of chilled drinks and lays chips in the mini Bus. We all had a unlimited fun and enjoyable time together in the whole trip and also on the way back to our place with music and Discussions. We had a many images clicks as a memorable part. We all employee’s gain lots of knowledge from this historical place and had a new experience there.